A spherical nuclear fuel element, as used in Pebble Bed Reactors, must be tested in a test reactor.
The pebble fuel element must be enclosed in a cylindrical structure, which is then to be located in a containing tube.
The objectives are:

This notebook is about the modelling in view of FEM temperature computations.
The results of the FEM computations are reported in another notebook.

NB
The dimensions and material values used are not representative for the real objects.

Structure of the test device

This is a general view, cut along the vertical axis. 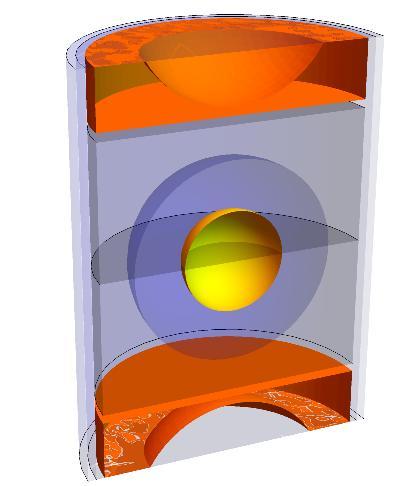 The fuel element generates volumetric power due to fission.
All parts in the device generate volumetric power due to exposure to a strong gamma field.
All generated heat is evacuated by conduction through the structural elements.
The heat is also evacuated by conduction through the gas gaps.
The outer wall of the containing tube is cooled by a high velocity water flow.

Modelling in view of FEM computations

In order to be able to perform FM computations on the device, we need to define the geometry in terms of Regions.

This is the complete geometrical model that can be used for FEM computations. 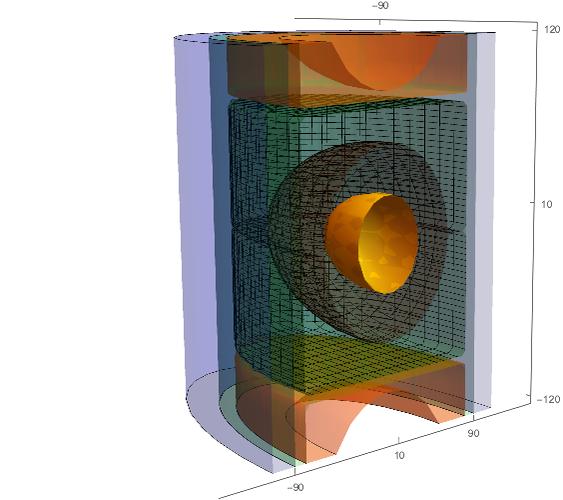 In another notebook we will show how

the model can be simplified using existing symmetries
the model is transformed into a multi-region continuum.